Whisky gets scared very easily and by all sorts of things that my other dogs don’t even notice. For example if a chair on the small patio is placed differently she will freeze and study it for a while before cautiously advancing to it to inspect it thoroughly with her nose, if something moves or a noise is made behind her she will panic and rush to her kennel or to the dogs’ couch whichever is closer. If I’ve been sitting with her and stand up she will panic and run to the extent of her rope. It’s heartbreaking to see all the little things create panic in her and it’s a bit disheartening too. Here is a picture showing her usual stance, head down a bit and looking warily around waiting for the next scary thing to happen. 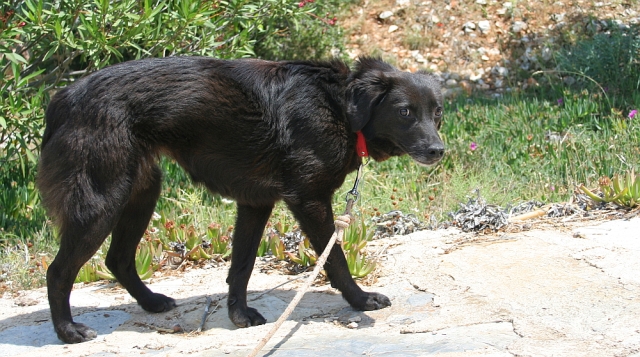 There are good things too of course, she will now come and stand right next to me while I pet her around her head and chest, that was a major breakthrough this week. She made another bit of progress when she ate her food outside her kennel, she hasn’t done it since though, I think it’s the presence of one or more of the other dogs that prevents her from being brave enough.

In the mornings when I go out with my first coffee and sit with them they all crowd round me and she joins in and wants a fuss the same as the others, that’s another big step forward. Here she is in a more confident mood, still keeping an eye on me though.

As this photograph shows she has a very large chest to waist ratio and big thighs, she must have some fast running dogs in her bloodline.

Now that she appears to be less stressed the other dogs are taking more of an interest in her, my cats too are being more friendly to her. They can sense that she has problems and didn’t really want anything to do with her previously.

I’m now trying to get her to take food or a treat from my hand, it is proving a bit of a sticking point so far. Perhaps if I take her down the garden so we are on our own she might pluck up courage, I’ll try that later.

Here’s a photograph showing two of the signals that dogs make, I was pointing a camera straight at her but it was a large black DSLR with a lens that must have looked like a big eye on the front of it. Obviously I was only trying to get a reasonable photo but this is the kind of thing that dogs (and cats) don’t like. 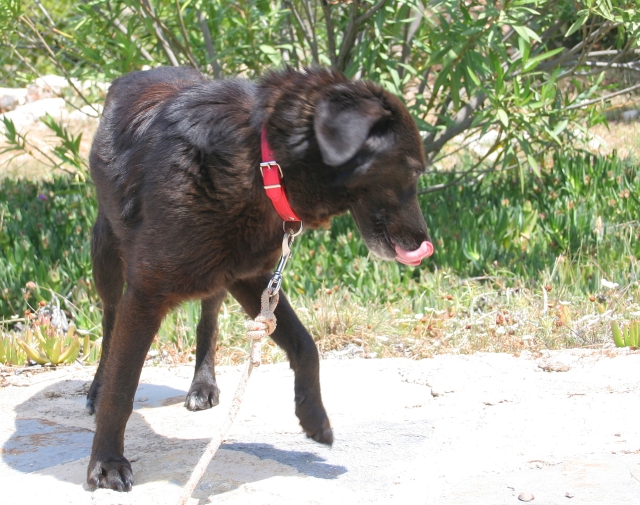 The first signal is her body posture, turning not only her head but most of her body away from me, the second signal is quickly licking her nose. Each of these signals mean “you’re intimidating me, both of these together mean “you’re being way too intrusive, please stop”. See, I said I’d be learning things didn’t I?