Dog sanctuary life is noisy and as I approached the gate with Whisky the barking grew louder and louder. I brought her back to have her ear tag removed and I had a few concerns about bringing her back. Would it upset her? Would the other dogs be aggressive towards her? Well I needn’t have worried, she took it all in her stride and when she saw some of the volunteers who she knew she was jumping up at them to be fussed! And at my house I had been trying to get her to come within stroking distance for a month. Jumping up to be fussed indeed!

It should have been obvious to me that she would feel at home, after all, she had been born in the sanctuary in 2013 and had lived there ever since. It was a lesson to me not to assume that all the dogs would be instantly happy to find a permanent home. However bad your life might be if you spend the first four years of it in “captivity” you are going to be unsettled by being taken somewhere else even if you are treated well.

It’s no wonder that such a lot of importance is placed on having a period of rehabilitation and adjustment for animals from zoos, circuses and laboratories when they are released and maybe you could stretch the analogy even further to include prisoners released from long jail terms, or is that a stretch too far?

Wolfie is my other dog that has spent time in the sanctuary but only a few weeks, previously he had lived free in Kaş so there was no comparison. Here’s Wolfie looking typically relaxed. 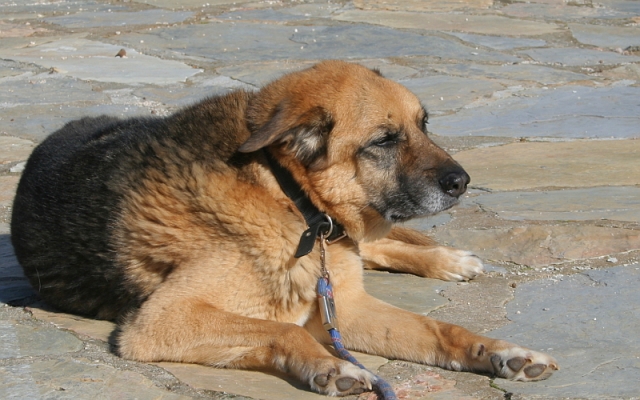 Well the only thing to do is to remain patient and little by little Whisky will grow to like it here with me.

Anyway Whisky only has the hole in her ear to show that she once had a tag and that will close up soon. I filled in the paperwork and Didem the Belediye Veterinarian took a photograph of Whisky and I together so that there can be no argument about who has adopted her.

We have made some more big strides this week too. I was sitting having a coffee on my front patio and she walked up to me, put her feet on the cushion of my chair and stood up in front of me for a fuss. Pity I didn’t have my camera close to hand.

From now on I’ll update the blog on a monthly basis unless there is some special news that I want to tell you about sooner. Please keep your comments and advice coming, I’m no expert, anything you write that will educate or just encourage me will be welcome.

This entry was posted in Uncategorized. Bookmark the permalink.